Syria is on course for destruction 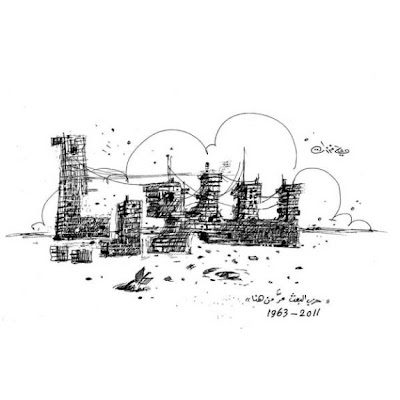 Bashar al-Assad knows his fall from power is inevitable, but seems determined his dominion will self-destruct with him

".....Ironically, 1 August is called Armed Forces Day – a day when Syrians can celebrate the institution that is supposed to protect them.

Many analysts argue that the Assad regime has made a desperate attempt to crush the uprising prior to the holy month of Ramadan, when prayers held every evening in mosques throughout the country are expected to increase the frequency and intensity of protests – but I don't think so.

I think this regime has deliberately and intentionally bloodied the nose of the Syrian people on the eve of this holy month. By now, only the most deluded of Assad's circle of close advisers would think that the Syrian uprising can ever be crushed. The start of Ramadan should be seen as the beginning of a war of attrition by the regime against the Syrian people, similar to the situation in Libya.....

In the end, Syria has gone down the road of Libya, not that of Tunisia or Egypt. As with Muammar Gaddafi, Assad seems to have realised that once the Syrian people broke through the fear barrier, his fall from power would be inevitable. As a result, I have no doubt that the regime now intends to pursue a ferocious campaign against the people who dared to rise up against it....

Whether it was Saddam Hussein or Gaddafi, it seems as if all Arab dictators have spent the decades of their rule, apart from plundering their countries, also ensuring their dominions would self-destruct should they ever be ousted from power, as an additional bolster to their eternal rule – Après moi, le deluge! I fear that when Assad is finally ousted from power, Syria will be left a smouldering wreck."
Posted by Tony at 4:16 AM