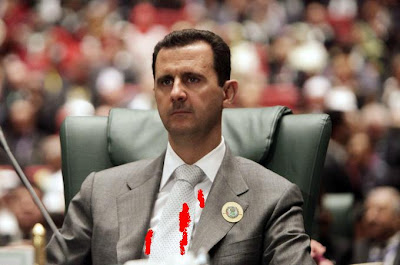 He is not defending Syria from sectarian tensions. The world must condemn our dictator's crimes now

".....The time has come for the world to say that Assad's regime has lost all legitimacy. That is what the Syrians want – no more and no less. A free conference of all the nationalist forces in Syria could then be convened, enabling Syrians to develop a collective national alternative, as they did in the first Syrian conference of 1920. Syria is an ancient civilisation; it needs no external guidance or foreign intervention to determine its future after the departure of this dictator.

Half a century of struggle has passed, changing both the vision and functioning of Syria's various political forces. All opposition groups are insistent that the uprising should continue on its peaceful, inclusive, pan-nationalist path. All would rally round a civil, plural state based on power sharing, free elections and a modern civil constitution in which all citizens – men and women – are equal. This is what the Syrians want, and what they are on course to achieve."
Posted by Tony at 3:59 AM