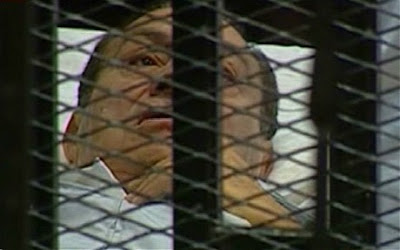 Seeing the Mubaraks behind bars will be widely viewed as poetic justice, but it's accountability – not humiliation – that matters

".....There is also a risk that the trial – if mishandled – could generate some undeserved sympathy for Mubarak. He is 83 years old and clearly unwell, though how unwell is a matter of debate – some say he is exaggerating his illness for propaganda purposes. On Wednesday he was lying on his back on a stretcher as the case began.

The other potential hazard is that it could distract Egyptians from efforts to consolidate their revolution. The Supreme Council of the Armed Forces, which is now in charge of the country while elections are prepared, may be hoping that the trial will divert public attention from its own increasingly authoritarian behaviour.

It is a ploy that the Mubarak regime itself resorted to quite often, contriving to dominate the headlines with sensational court cases in times of political and economic difficulty."
Posted by Tony at 4:06 AM