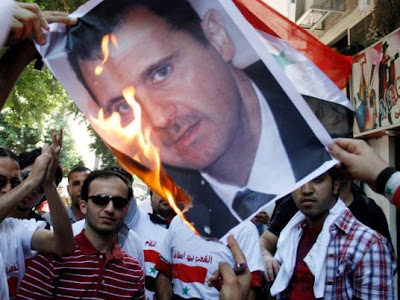 "Syrian Ambassador to Egypt Youssef Ahmed traveled to Damascus with his family Wednesday.
Ahmed refused to say if he had left for vacation or other reasons, but the trip follows protests outside the Syrian Embassy that demanded he leave.

The protesters condemned the Syrian military's violent suppression of protests in Hama, al-Bukamal and Deir al-Zor. Syria is in the midst of an uprising against President Bashar al-Assad that has been going on since March.

The protesters called on Field Marshal Hussein Tantawi, the chief of Egypt's ruling military council, to expel the ambassador and sever diplomatic relations with Assad's regime."
Posted by Tony at 9:08 PM