Gaza is no longer alone


In the nations of the Arab spring, people are now rising up to demand Palestinian rights as well 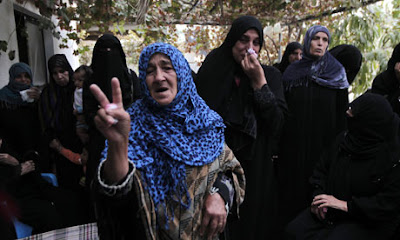 ".....Since he won the presidency, Mohamed Morsi has tried to be a pragmatic politician. He pressed on with "security co-ordination" with Israel in Sinai; he started sealing up the tunnels that provide a lifeline to the besieged Gazans; he rejected the proposal of a free trade area on the borders between Egypt and Gaza; and he sent an ambassador to Tel Aviv with a fulsome letter to Shimon Peres. And so he found himself uncomfortably cosied up with remnants of the Mubarak regime and aficionados of the military government.
The rank and file of the Muslim Brotherhood and their Freedom and Justice party had a hard time justifying the actions of their man in the presidential palace to the rest of the country. Progressives and liberals mocked them for their big talk on Palestine all the years they were in opposition, and their resounding silence now they were in power. Skits about Morsi's "love letter" to Peres appeared online and parodies on Cairo walls.

Now, the Israelis have pushed him – pushed him perhaps into a position where he'll find himself more at ease in his presidency, and more in tune with the people. Large groups of young Egyptians have been heading for Gaza; my youngest niece is one of them. Like the efforts of the world's civil society to send ships to Gaza, young Egyptian civilians with a passion for freedom are going to support their friends. And on a more "official" level, medics and pharmacists have already arrived there. Abdel Moneim Aboul-Fotouh, a presidential candidate and doctor, has gone – as he did in 2008 during Israel's "Operation Cast Lead", long before he had political intentions. The Arab Doctors' Union has called for donations and volunteers.....

In every Arab country where the people rise up to demand their rights, they demand action on Palestinian rights as well. Tunis has just announced that its foreign minister is heading for Gaza. In Jordan today, hundreds of thousands were on the streets and, as well as demanding the fall of their own regime, they're also calling for justice for Palestine. Protesters are out in Libya. In Egypt, people are heading for Rafah. We are heading for true representation of the people's will in the region and, in the coming years, governments will need to follow the road shown to them by their people."