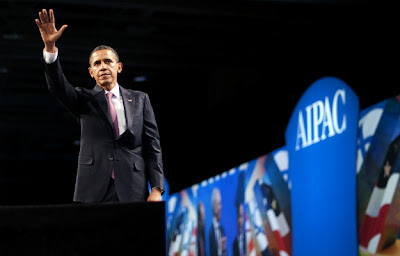 "Has AIPAC lost its mojo? Does Obama's reelection prove that the Israel lobby is getting weaker, and that he can return to Middle East peacemaking with new confidence and resolve? It's no secret that Obama has a frosty relationship with Israeli PM Benjamin Netanyahu, fueling GOP hopes that Israel would be a wedge issue that would attract lots of Jewish voters and donors. At least one prominent hardline Zionist, Sheldon Adelson, spent tens of millions of dollars trying to buy the election for Romney, and he got bupkis for all that cash. So now that Obama's got a second term, will he blithely ignore AIPAC et al and pursue an even-handed approach to the Middle East peace process?......


But I don't see a sea-change; at least not yet. AIPAC and its allies don't get everything they want, of course, but they can still put real limits on what the president and his advisors are willing to try. We still have not reached the point where politicians are willing to openly acknowledge that a normal relationship would be better for both countries than the current special relationship of unconditional U.S. support. You didn't hear Obama, Romney, or any other major candidate say anything like that in 2012, which tells you that fear of the lobby remains a potent political force. That's not good for us, but it's even worse for Israelis and Palestinians. Which is why I'd be delighted if the next four years proves me wrong.   "