The baby of a BBC Arabic cameraman was killed by the Israeli air strikes on Gaza on Wednesday, the corporation says. 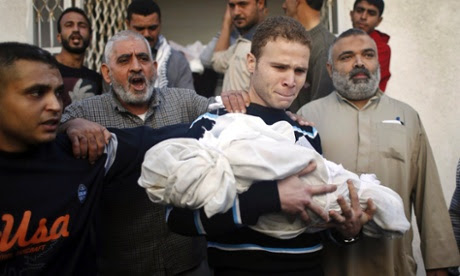 Jihad al-Masharawi, a Palestinian employee of BBC Arabic in Gaza, carries the body of his 11-month-old son Omar, who according to hospital officials was killed by an Israeli air strike in Gaza City 15 November, 2012. Photograph: Mohammed Salem/Reuters.......

Muslim Brotherhood calls for Egypt to cut ties with Israel

A lot of eyes are on the response by the Muslim Brotherhood government in Egypt, especially given its historic ties to Hamas, but Abdel Rahman- Hussein, in Cairo, says now that the group is in power it seems to be adopting a pragmatic approach taking "pretty much the same measures that Hosni Mubarak took during Operation Cast Lead" in 2008-09. He said:


The Brotherhood are facing criticism already that they are not doing anything that is too different from a regime that was overthrown by the Egyptian people and was deemed complicit in the siege of the people of Gaza ...The Muslim Brotherhood has always criticised the Mubarak regime basically for letting things happen on its border because Gaza's on the border with Egypt and the Sinai border and I think a stronger Egyptian position would have made Israel think twice about carrying out such an operation, not knowing what would happen on the other side of the border ...
There will be demonstrations [in Cairo] today and tomorrow but that's what happened in 2008. The Muslim Brotherhood along with a lot of secular opposition forces held a series of protests against the Israeli offensive during that time but they weren't in power back then. They're in power now and it seems that, basically, they're pretty much going down the same route [as the Mubarak regime]......"

can you surmise what israel is trying to do strategically?

is this about election posturing? is it just about killing palestinians to make it feel stronger in the region? or what?

it has nothing to do with responding to rocket fire (not that that would justify anything), so what is going on?

In his conversation with Mr. Obama, Mr. Morsi said, he “clarified Egypt’s role and Egypt’s position; our care for the relations with the United States of America and the world; and at the same time our complete rejection of this assault and our rejection of these actions, of the bloodshed, and of the siege on Palestinians and their suffering.”

".... I will not do anything for Gaza and will only say a few words of condemnation."

That says it all.