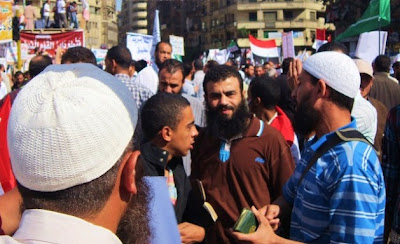 "CAIRO, Nov 14 2012 (IPS) - An ultraconservative Salafi cleric recently sparked outrage among Egypt’s liberal circles when he attempted to justify his opposition to a proposed constitutional article that would outlaw the trafficking of women for sex.

Speaking on privately-owned Al-Nas satellite channel, Sheikh Mohamed Saad El-Azhary said he feared the proposed article could conflict with the local practice of child marriage. He explained that in Egypt, particularly in rural areas, there is a culture of marrying off girls as soon as they hit puberty.

“The important thing is that the girl is ready and can tolerate marriage,” El-Azhary declared......"
Posted by Tony at 6:47 AM