Early on Friday, 85 missiles exploded within 45 minutes in Gaza City.
One missile hit the interior ministry and another hit an empty house belonging to a senior Hamas commander.
Those strikes, together with an attack on a generator building near the home of Gaza's Hamas prime minister, Ismail Haniyeh, signaled that Israel is expanding its offensive beyond military targets. 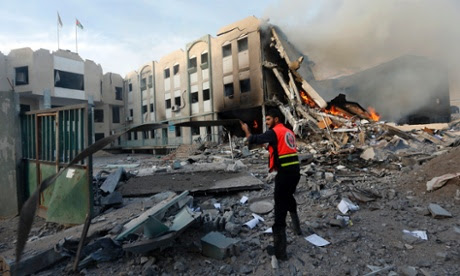 A Palestinian firefighter tries to extinguish a fire after an Israeli air strike on the building of the Hamas ministry of interior in Gaza City. Photograph: Mohammed Salem/Reuters

The BBC's Middle East bureau chief, Paul Danahar, says the interior ministry was where people used to get passports, ID cards & permission for journalists to go into Gaza. He says the ministry is still on fire......"
Posted by Tony at 4:58 AM