This Reuters video shows people panicking and running for cover in Ras al-Ain as warplanes fly overhead, as well as a row of destroyed shops afterwards.

The beginning of the video, which the news agency cannot verify, purports to show a car in Damascus crushed by a government tank, with the driver's body still inside......

Syrian rebels may have more powerful shoulder-mounted surface-to-air missiles than previously thought, if photographs posted by Brown Moses (Eliot Higgins) on his blog are correct.

His photos show a man with what he identifies as an SA-16 (“reportedly captured by Ansar al-Islam from an air defence in East Ghouta, near Damascus”) and an SA-24 (“apparently looted from Babla Base air defence base by Ansar al-Islam”) - “the latest generation of Russian surface to air missiles”. 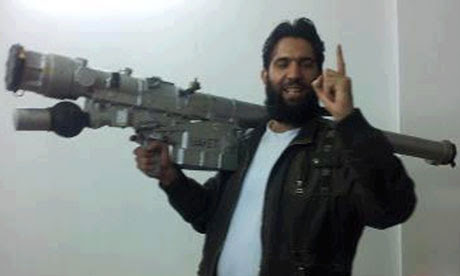