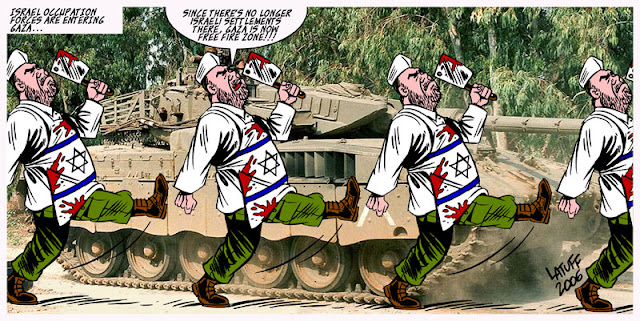 Gaza is Now a Free Fire Zone, by Carlos Latuff.


"The Israeli cabinet has authorised the call-up of 75,000 reserve troops as fears grow that the prime minister, Binyamin Netanyahu, will order a ground invasion after Egyptian efforts to broker a ceasefire did not make headway and Hamas fired a rocket at Jerusalem.

The US was scrambling to prevent a further escalation of what it described as a "very, very dangerous situation" in Gaza. Britain warned that a ground invasion could cost Israel international support.

But concerns that Netanyahu is preparing to escalate the assault were strengthened as he held a strategy session with senior ministers. Also, the size of the call up is on a scale comparable to Israel's invasion of Lebanon six years ago, and several times larger than the number of reservists drafted during the last major incursion into Gaza in 2008. Tanks were seen gathering near the Gaza border, and roads in the area were closed to Israeli civilians.

Israel's deputy foreign minister, Danny Ayalon, told CNN that a ground invasion could come before the end of the weekend if the rocket attacks continue......"
Posted by Tony at 5:01 AM