Egypt's president is taking a diplomatic route over Israeli assault, but response is unlikely to placate anger at home 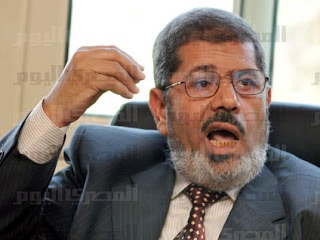 
".....Hamas is an offshoot of the Brotherhood, and it was believed that the Egyptian reaction to an Israeli assault on them would be markedly different with the ascension of the Brotherhood to power in Egypt and the longstanding ties between the two groups. However, many who have been following the Brotherhood over the years believe otherwise.

"They are a reformist, not revolutionary, group. They have shown on many occasions that they are more than happy to keep the [1979] Camp David peace treaty with Israel and not radically alter Egyptian foreign policy. The excuses are ready, let's build Egypt first and so on," said Hossam Hamalawy, journalist and member of the Egyptian Revolutionary Socialists movement.

Morsi's measured response may not be enough to placate Egyptians, who have already begun protesting against the latest Israeli offensive, with more demonstrations scheduled for the next few days. The government response so far falls short of demands articulated by Hamalawy, which include the permanent opening of the Rafah crossing and not just for humanitarian reasons, but also to provide relief to the besieged territory, and the abolishment of the Camp David accords or, at the very least, a referendum on whether to keep the treaty....

This seeming disconnect between Brotherhood members and its leadership, as well as secular opposition forces – whose commitment to the Palestinian cause is no less unerring than Islamist forces – could potentially prove troublesome for Morsi.

"The young base cadres of the Brotherhood are sincere about the Palestinian cause," Hamalawy said, "what concerns me is the hypocritical and opportunistic leadership that mobilised mass protests when they were in opposition – with Morsi himself once calling for an end to Camp David – but now that they are in power they will not act upon it.""
Posted by Tony at 9:05 AM