Once Again—Death of the Liberal Class 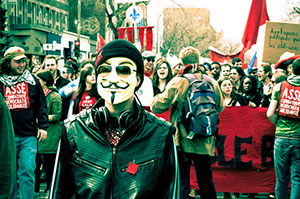 "The presidential election exposed the liberal class as a corpse. It fights for nothing. It stands for nothing. It is a useless appendage to the corporate state. It exists not to make possible incremental or piecemeal reform, as it originally did in a functional capitalist democracy; instead it has devolved into an instrument of personal vanity, burnishing the hollow morality of its adherents. Liberals, by voting for Barack Obama, betrayed the core values they use to define themselves—the rule of law, the safeguarding of civil liberties, the protection of unions, the preservation of social welfare programs, environmental accords, financial regulation, a defiance of unjust war and torture, and the abolition of drone wars. The liberal class clung desperately during the long nightmare of this political campaign to one or two issues, such as protecting a woman’s right to choose and gender equality, to justify its complicity in a monstrous evil. This moral fragmentation—using an isolated act of justice to define one’s self while ignoring the vast corporate assault on the nation and the ecosystem along with the pre-emptive violence of the imperial state—is moral and political capitulation. It fails to confront the evil we have become......"
Posted by Tony at 4:28 AM