Bush: This is their Tet 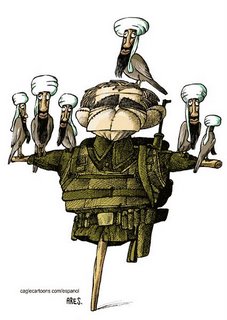 "In his interview with George Stephanopoulos on Wednesday evening, George W. Bush accepted that there might be a parallel between the spike in killings of US troops in Iraq and the Tet offensive in Vietnam. Many commentators are saying that he finally admitted that Iraq is a quagmire like Vietnam, but this is a complete misreading of what Bush is saying.

Bush's position is that things are going just great in Iraq, and that a few trouble-makers have managed to hijack the US media with a small number of limited bombings and other sabotage, and have made it look like the US isn't making progress. Bush believes that the media and Americans are falling for a get-up job. So he is is trying to say to the American public that just as the Tet offensive was a military defeat for the Viet Cong but a propaganda defeat for Washington, so the October offensive of the Sunni Arab guerrillas is so much smoke and mirrors, a mere propaganda stunt with no substantive importance for Iraq.

But in fact, the current guerrilla war against US troops and the new Iraqi government isn't at all like the Tet offensive. It is deadly serious. Because the US military is not defeating the guerrillas militarily any more. They have succeeded in provoking an unconventional, hot civil war, which was their "poison pill" strategy for getting the US out. The US has alienated the Sunni Arab population decisively. In summer of 2003, only 14 percent of them supported violent attacks on US troops. In a recent poll, 70 percent supported such attacks. And, the guerrilla movement is well-heeled, well-trained, and adaptive. Anderson Cooper 360 on CNN for Wednesday presented videotape showing well-trained snipers shooting down US troops in Baghdad. The guerrilla war is real, not just a political show put on to weaken the will of the fickle American public.

What is delicious is that the general American public does not hold the view of the Vietnam War popular among far-right politicians like Bush, and so no one but the true believers will catch his drift here. In fact, most Americans will assume that Bush has admitted that we are in an unwinnable quagmire in Iraq, just as in Vietnam. And the Iraq=Vietnam identification is likely to stick. Of all his misstatements and malapropisms over the years, any one of which would have robbed most people of credibility or made them a laughing-stock, it is ironic that this miscalculation, uttered coolly and with no stutter, may have been his biggest gaffe of all."
Posted by Tony at 8:29 AM