“My Name is Rachel Corrie” Opens in New York 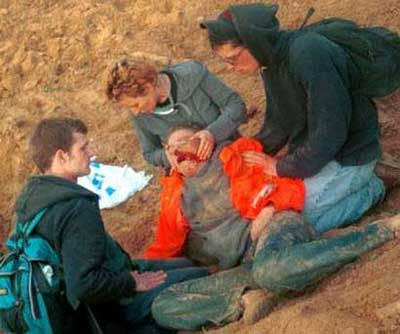 Friends try to aid Rachel Corrie after she was run over by an Israeli army bulldozer. 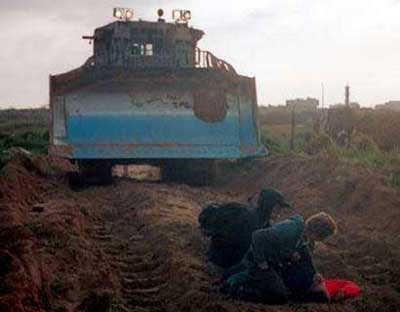 The Israeli bulldozer ran over her and then backed up, crushing her chest and skull. 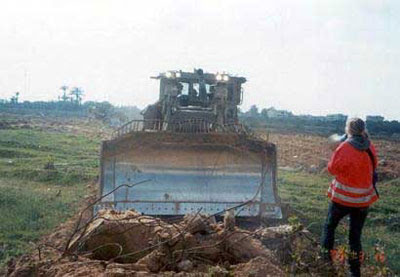 Rachel Corrie stands in front of an Israeli army bulldozer wearing an orange jacket so that she can be easily identified and seen.

"“My Name is Rachel Corrie” – a play based on the life of the late US peace activist who was killed by an Israeli bulldozer - was scheduled to open last March at the New York Theatre Workshop. But six weeks before opening night, the theater announced it was indefinitely postponing the production. The move that was widely criticized as an act of censorship. On Sunday, the play finally opened at the Minetta Lane Theatre in New York. We play exclusive excerpts of the play, and speak with Rachel Corrie’s father, Craig; her sister, Sarah; and the play’s co-editor, Katharine Viner.

Rachel Corrie was killed in Gaza three years ago when she stood in front of an Israeli bulldozer set to demolish a Palestinian home. The play is based on Corrie”s writings before her death.
“My Name is Rachel Corrie” was scheduled to open last March at the New York Theatre Workshop. But six weeks before opening night, the theater announced it was indefinitely postponing production of the play. They cited the current political climate as the reason for the cancelation, pointing to Prime Minister Ariel Sharon"s coma and the election of Hamas.

The move was widely criticized by artists and activists all over the world. At the time, we had a debate on Democracy Now and I read a letter written by Nobel laureate Harold Pinter to the artistic director of the New York Theatre Workshop James Nicola and the theater”s managing director, Lynn Moffat. The co-editor of the play, Katherine Viner, joined us from London.

Katharine Viner. Co-editor of the play My Name is Rachel Corrie. She is also an editor at the London newspaper The Guardian.

Excerpts from “My Name is Rachel Corrie.”

Excerpt of the documentary, “Rachel Corrie: An American Conscience.” It was directed by Yahya Barakat."
Posted by Tony at 12:41 PM