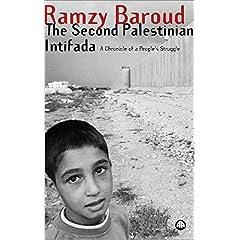 History of a Struggle for Survival

"All too often, historians and scholars write about war from a comfortable distance. Readers do not feel the pain of families driven from their homes by invading armies. We do not hear children scream in terror when their siblings and parents are murdered in front of them. Human suffering is just another episode in a war-torn world.

In The Second Palestinian Intifada, Ramzy Baroud defies such polite conventions by taking readers on a journey into the heart of the Palestinian peoples' struggle to survive war, massacres, assassinations, poverty, and exile.

A prominent writer, scholar, historian, and editor, (Searching Jenin: Eyewitness Accounts of the Israeli Invasion), Mr. Baroud grew up in a poverty-stricken refugee camp. He lived among Palestinians who grew old holding the rusted keys to homes confiscated by the Israeli government. His own grandfather kept hope alive by listening to the radio, believing that one day he would hear the call to return to his beloved olive orchards and the only way of life he and his ancestors had ever known. Instead, the author's grandfather died hearing the sounds of an army determined to destroy the will of the Palestinian people.

Ramzy Baroud does not romanticize violence. He simply states, without rancor and with a quiet passion, what it is like to live, not year after year, but decade after decade, watching children go hungry and suffer brain damage from malnutrition, watching the Israeli army harass, insult, disappear, and murder friends and family; watching, perhaps most tragically, young men and women blow themselves to pieces in crowded Israeli cafes. Baroud wants readers to understand the reasons behind these attacks, but he argues that suicide bombers mimic the indiscriminate brutality of the occupation.

The Second Palestinian Intifida chronicles the crimes that former Prime Minister Arial Sharon and many other Israeli politicians have committed against the Palestinian people. But these details are less important, really, than the questions the author poses time and again in this book: Why does the United States continue to fund the expropriation of Palestinian land? Why have a succession of U.S. administrations supported Israel's illegal occupation of Gaza and the West Bank? How could it be that the lives of Palestinian children are so much less important than their counterparts in Israel?

This is not a book for those who want surface, sanitized, accounts of the Palestinian Diaspora. Ramzy Baroud is committed to truth telling, and his new book will undoubtedly disturb, shock, and outrage his readers. One can only hope that those who claim to love and support the state of Israel will not only read, but study, this important book. Not to make anyone feel ashamed, but so that even Israel's most ardent supporters will understand that no nation can brutalize, indeed terrorize, an innocent people forever."
Posted by Tony at 10:46 AM