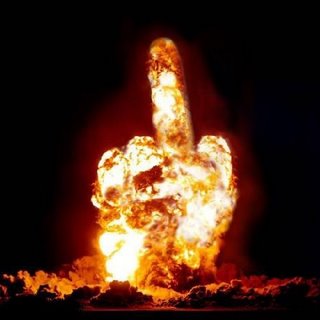 "The signs of eroding support for Bush's "stay-the-course" strategy are virtually everywhere in Washington, where senior Republicans, such as the chairman of the Senate Armed Services Committee, John Warner, are moving into open revolt against what they see as a rapidly deteriorating situation and Bush's bullheadedness in still believing that Iraq will somehow become a model for democratic transformation in the Middle East.

Similar auguries are visible in London, Washington's closest ally in the "global war on terror" and the biggest contributor of troops by far to the U.S.-led coalition in Iraq.

In a lengthy newspaper interview last week, Britain's new army chief, Gen. Sir Richard Dannatt, echoed the arguments made over the past year by the Democratic Party's most prominent advocate of a swift withdrawal, Rep. John Murtha.

Dannatt's views, according to a column by a former senior instructor at the Royal Military Academy and director of the Center for Foreign Policy Analysis, Paul Moorcraft, reflect the thinking of the "British military establishment."

All of these developments have created panic among the war's supporters, particularly neoconservatives who were most enthusiastic about invading Iraq. In a cover article in this week's Weekly Standard, in which he warned, contrary to some critics, that "exiting Iraq … would fan the flames of jihadism," Reuel Marc Gerecht of the American Enterprise Institute (AEI) conceded that a "consensus is growing in Washington" on both the Right and the Left in favor of a "rapid departure."

The second option, called "Redeploy and Contain," appears similar to a plan floated last year by the Center for American Progress and subsequently endorsed by most Democratic lawmakers. It calls for a gradual withdrawal of U.S. troops to bases outside Iraq from which they could strike against terrorist targets in Iraq or elsewhere in the region.

The fact that the ISG's co-chair is former secretary of state and Bush family consiglieri James Baker, with whom Bush reportedly talks on a regular basis, is likely to give the final report, due out early next year, serious heft, particularly for a Congress, a military, and top Republican strategists that are already desperate for a face-saving exit strategy, timetable included."

THE LIMITS OF POWER: WHAT A US DEFEAT!
Posted by Tony at 4:33 AM