Iran Sparked Islamic Divide, Iran Only Can Defuse It 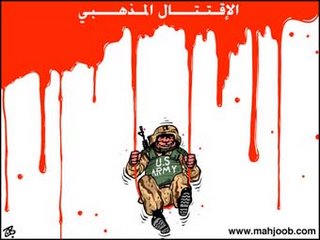 By Nicola Nasser
(Nicola Nasser is a veteran Arab journalist in Kuwait, Jordan, UAE and Palestine. He is based in Ramallah, West Bank of the Israeli-occupied Palestinian territories)

"Tehran for the first time and at the highest level has this week went public on the so far taboo Sunni-Shi'i divide, accused the American Great Satan of exploiting and fuelling the historic Islamic sectarian tragedy, which is true, but offered no way out of the divide except a verbal call for unity, which has to be tested against the Iranian policies on the ground in Iraq, where the Iranian call can make or break.

The sophisticated scholarship and leadership of Khamenei could not be credited in good faith with inexperience or innocence to justify his missing the real “bare truth” in Iraq. He portrayed the conflict in Iraq as only “interference” by the “occupiers” in the affairs of what he presented as the “national” government, ignoring on purpose the “bare truth” that it is the government which the occupiers installed and legitimatized without any sovereignty even inside its captivity in Baghdad’s Green Zone.

Tehran also for the first time went public this week on the “superior situation” Iran has gained under the U.S. occupation of Iraq, a fact which makes it impossible to absolve it from being responsible also for the state of affairs of its unfortunate western Muslim Arab neighbor. “Iran is now enjoying a superior situation in Iraq … Today, many of the European, American and regional analysts and heads of states admit that the Islamic Republic of Iran is having a powerful position in Iraq," said special assistant to Iranian Foreign Minister for Strategic Planning, Mostafa Moslehzadeh.

In a bad faith reading the “superiority” Iran enjoys in Iraq now is tantamount to sharing the Iraqi pie with the Great Satan; in a good faith interpretation it reflects a conflict with the Great Satan over the Iraqi pie, or most likely it is maneuvering either to make Iraq a battle ground in case of a U.S. attack on its territory or to use its position there as a bargaining chip to negotiate with Washington, a possibility that almost came true earlier this year.

The flare up of the sectarian conflict in Iraq, which has so far claimed the worst bloodletting, sectarian cleansing and unleashing of an historic genie of a long-dormant Sunni-Shiite divide is precisely the fear that Saddam tried to fend off, backed by the overwhelming majority of Arab regimes and people, and generously financed by his immediate Arab neighbors who feared the regional repercussions and were ready to deplete their budgets and fight until the last Iraqi to confine the Islamic revolution within Iran’s borders.

The sectarian divide and a rapprochement between a U.S.-installed “Shiite-Kurdish” regime and Iran were evidently foreseen by Washington and taken into account as positive factors in neutralizing Iran and the Iran-influenced Shiites and Kurds of Iraq, a calculation that the current state of affairs in Iraq vindicates as a proven anticipation.

The prerogatives of Islamic unity and averting a Shiite-Sunni divide from playing into the hands of U.S. occupiers in Iraq and far beyond in the region requires that Iran accommodates the proven historical experience that exclusion of Arabs and Pan-Arabism deprives Islam of its vital component, acknowledges that sectarization of Islamic politics adversely affect Islamic unity, rejects in principle the exploitation of foreign powers’ interference to settle intra-Muslim scores, and translating these prerogatives into concrete policies. Of course Iranian commitment to such prerogatives requires Arab reciprocity, which in turn necessitates the highest level of dialogue and political engagement."
Posted by Tony at 8:57 AM