A Consensus Develops: Leave the Course 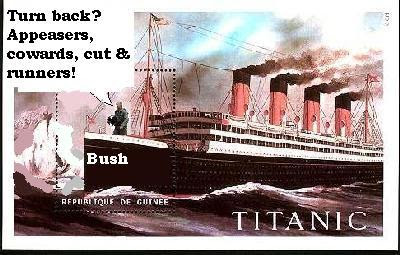 ""Plan B" – that is, anything but "staying the course" – has been on the lips of virtually every foreign policy analyst who considers him or herself worthy of the name this past week when, it seemed, the entire capital appeared to decide that whatever the U.S. has been doing in Iraq for the past three months, six months, or three years is failing, and failing spectacularly.

Even a few of the war's most enthusiastic neoconservative supporters have come to admit that it may in fact have been a serious strategic mistake, although they seem determined still to stave off the growing consensus – even among Republican circles – in favor of some kind of timetable for withdrawal.

"That the Iraq war is, if not a failure, failing, requires little demonstration," conceded Eliot Cohen, a member of the Pentagon's Defense Policy Board (DPB), in a column entitled "Plan B" published in the Wall Street Journal Friday.

Cohen, whose 2002 book, Supreme Command, about how the West's greatest civilian wartime leaders constantly ignored or overruled their military commanders received widespread publicity when Bush took it on vacation with him several months before the Iraq invasion, argued that the loss in "American prestige" resulting from the Iraq adventure is such that it "will not be restored without a considerable and successful use of American military power down the road."

The gloom – not to say growing desperation – regarding the situation in Iraq is, of course, compounded not only by the relentless daily media reports cataloguing yet more violence in Iraq, and the Maliki government's failure or inability to do anything about it, but also by the sense that the man at the top here, George W. Bush, either doesn't understand how bad the situation has become or is so stubborn and lacking in self-confidence that he wouldn't admit it if he did.

Hence the sudden rise in talk not just about a coup d'etat in Baghdad that could somehow produce a new political leadership capable of pacifying the country – either through appeasement or ruthless repression (either of the Sunni insurgency or of the Shi'ite militias) – but about effective "regime change" at home, as well.

Indeed, none other than Harlan Ullman, a defense expert who coined the idea of "shock and awe" in military strategy, noted in his column in the Washington Times last week that Bush's stubbornness represented a real obstacle to sensible policies not just in Iraq, but in East Asia, where North Korea's recent nuclear test has been seen as yet another major Bush failure, and elsewhere."
Posted by Tony at 10:09 AM