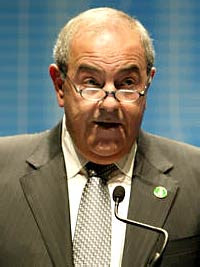 "• Coup in Baghdad: While given little credence in Washington, this scenario is being widely talked about in Iraq and in neighboring countries, both on the streets and among senior political and military officials.
According to the scenario, the new U.S.-trained army, along with elements of Saddam Hussein's Ba'athist-led army, would stage a coup to oust the al-Maliki government and replace it with one led by a more effective figure -- by most accounts Mr. Allawi.
One Iraqi Sunni living in Dubai, who is in close contact with Sunni generals in exile in both the United Arab Emirates and Saudi Arabia, said those generals have been discussing such a "Plan B" with secular Shi'ites and U.S. officials for months.
These officers reportedly are convinced that Miss Rice has been discussing such ideas during a series of visits to Saudi Arabia over the past eight months.
Mr. Allawi, a secular Shi'ite who led the government before the 2005 legislative elections, is known as a strong man with backing from both secular Shi'ites and Sunnis tired of the sectarian killings. The politician also is liked by U.S. intelligence agencies, which were disappointed that his party was unable to win more seats in the parliamentary elections.
"The army scenario is not a bad scenario for the United States," said Robert Killebrew, a retired Army infantry colonel and national security analyst who predicted civil war in Iraq more than a year ago. "U.S. policy issues in the Middle East and Iraq do not require a democratic Iraq, it only requires a stable and friendly Iraq," he said.
Under this scenario, the Dubai-based Sunni source said, the army would gradually bring back elements of Saddam's former army, removing a major grievance that is driving the insurgency.
"The insurgency will come under control as most of them are concerned with keeping Iraq as one country. This is the most important for them and for the surrounding Arab countries," said the former officer.
According to most coup talk, the United States would publicly condemn the move but support the new government after a decent interval.
"My preference would be that there would be a certain amount of sanctimonious hand-wringing and saying that we don't agree with the overthrow of a democratically elected government," said Mr. Killebrew. "But we will continue to support the Iraqis in their fight against the insurgency, which would be de facto support." "

SAY HELLO TO THE NEW DICTATOR (ALLAWI) WHO USED TO WORK FOR THE OLD ONE (SADDAM). WHY NOT BRING SADDAM HIMSELF BACK?

BUSH SENIOR WAS RIGHT, BUT THE DIM SON WOULD NOT LISTEN.
Posted by Tony at 10:15 AM