The Charnel House of Baghdad 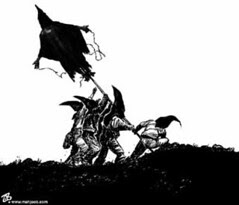 The War is Lost, But the Killing Continues

"There are three things wrong with the current policy in Iraq.

More important, we must recognize where we are now in a conflict that is progressively intensifying and will not let up until the occupation ends.

There is no "government" under occupation, just foreign-military rule. Prime Minister Nouri al-Maliki has no power and he governs nothing beyond the walls of America's the Green Zone.

If we are serious about concluding the war in Iraq, we must deal directly with the leaders of the Iraqi resistance, many of whom were part of the former Ba'athist regime. There are rumors that talks are currently taking place in Amman, Jordan between representatives of the resistance and American officials, but there is no solid confirmation of this.

This is what really concerns western elites who, up until a few months ago, fully supported the Bush agenda. The attention devoted to Iraq is loosening America's grip on the rest of the empire, and our influence around the world is in sharp decline. As we become further mired in an unwinnable war; there is growing sense that we may have already turned the corner and are headed for an impending tragedy.

As the criticism continues to mount, the administration gets more embattled and mistrustful. Bush equates pigheadedness with steely-resolve, and remains impervious to reason. He is still in the clutches of his key advisors, Cheney and Rumsfeld who refuse to entertain the notion of early withdrawal. They have already indicated that the recommendations of the James Baker "Iraq Survey Group" will be ignored. There stubbornness paves the way for an even greater tragedy in the very near future.

What happens when the war is lost but the fighting continues?