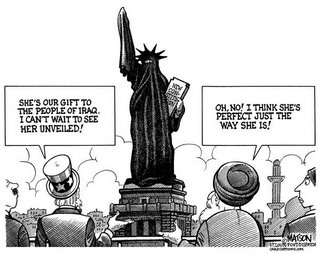 There's no wriggling out of responsibility for the Iraq disaster

"In the veritable tsunami of recantations and recriminations pouring out of former supporters of the war, from Francis Fukuyama to various Republican members of Congress, there is one constant theme: Don't blame us! Who knew that Iraq had no weapons of mass destruction? No one could have known about the rise of the insurgency. Nobody told us!

The only proper answer to this is: Poppycock!

For example, Jonah Goldberg is now claiming that he just didn't have a clue, and that "if I had known then what I know now" he would never have signed on as one of the war's loudest cheerleaders. But of course I personally warned Jonah that he had his head up his ass in a March 24, 2003 column, written as "Operation Iraqi Freedom" was being hailed in the media as a Great Victory:

"Up until Saturday our 'embedded' media was projecting images of Iraqis dancing in the desert, delirious with joy at the arrival of their 'liberators,' but by Sunday morning the edges were already beginning to fray around the official story of a near-seamless 'Operation Iraqi Freedom.'

"The U.S. media kept showing feel-good agit-prop as long as they could. We were treated to endless repetitions of that rather corny image of a portly Iraqi and a bunch of kids bouncing up and down with glee as a U.S. soldier ripped down a portrait of Saddam in the border town of Safwan. National Review's Jonah Goldberg was quick to jump on it as evidence that he and his fellow laptop bombardiers had been right all along:

"'There's every reason to assume that such stories will be multiplied a hundred, if not a thousand times over as U.S. forces approach the capital of the Republic of Fear.'

"Not so fast. By Sunday, reality was breaking through the obscuring mist of war propaganda, and Reuters was reporting the 'liberation' of Safwan somewhat differently."

"For the first few days, we saw only sanitized images of a clean, hassle-free war, amid hints of a winged victory beckoning in the near future. But that is fast giving way to the gritty reality of the quagmire we are falling into. The 'cakewalk' that Richard Perle and his fellow chickenhawks confidently predicted is turning into a forced march into Hell."

America's looming defeat in Iraq was easily predictable: after all, the British, the Turks, the Ottomans, and, further back, the Romans, the Persians, the Mongols, and the Macedonians under Alexander the Great had all been driven out of Mesopotamia, some quicker than others. Why did anyone think the Americans would be the exception?

"If only we knew then what we know now" – that's the mantra we're hearing from the excuse-makers, Democrats as well as Republicans and repentant neocons, now that the truth about this rotten war is out there in the open, plain enough for even the willfully blind to see. Well, I'm not buying it. There were plenty of indications that the "intelligence" cooked up by the neocons was faked, but nobody in Washington wanted to hear it.

Now these same people are ginning up another trumped-up WMD charge, this time against Iran – and one can only shake one's head in wonder at the sheer gall of it. American officials recently accused Iran and Syria of being the main obstacles to peace in the Middle East and, as foreseen here, are not so subtly threatening to extend the war throughout the region. It was all so predictable – which is why you read it here first."
Posted by Tony at 7:43 AM