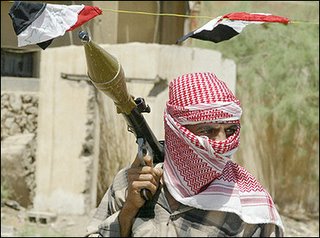 There can be no victory in Iraq. The only choice is between an honourable exit - and a scuttle

"The choice for the US and Britain in Iraq is no longer between staying or leaving. It is a choice between an honourable exit and a scuttle - an undignified withdrawal, probably under fire, as occurred in Vietnam a generation ago. Few policy makers in Washington and London are yet prepared to accept this gloomy conclusion. Some still believe that some form of "victory" can be salvaged. But the facts on the ground are unforgiving. So far the war has killed 3,000 US soldiers and cost the US tax-payer at least $400bn. Iraqi casualties are so horrifying as to suggest genocide.

The US and the UK should announce a firm date for a full military withdrawal from Iraq, including the closure of all bases. Such an announcement would go a long way to meeting the principal demand of the various strands of the insurgency and focus Iraqi minds on national reconciliation.

Iraq's neighbours - Saudi Arabia, Jordan, Syria and Kuwait, as well as Turkey and Iran - must all be involved in the search for an Iraqi settlement.

Implementation will, of course, be difficult. It can probably not be achieved without some form of armed force, which has to be Iraqi and free, as far as possible, from political, ethnic or religious affiliations. From the creation of the Iraqi state in 1921, the Iraqi army was the most important single institution holding the country together. It was purged several times - in 1936, 1958, 1963, 1968, and during the Iraq-Iran war of 1980-88, but it remained the backbone of the state throughout. One suggestion would be to form a neutral army council of six respected generals and give them the task of rebuilding a truly Iraqi army from all the trained men at present available, whatever their past.

The US should commit itself to contributing $10bn a year for five years to an Iraqi reconstruction fund, to be disbursed under UN control, and should encourage others (the Gulf states, China, Japan, the European Union, Russia, etc) to contribute too. The vast embassy that the United States is now completing in Baghdad - far too big for America's future diplomatic needs in Iraq - could be donated to the Iraqi people as a university campus."
Posted by Tony at 5:16 AM