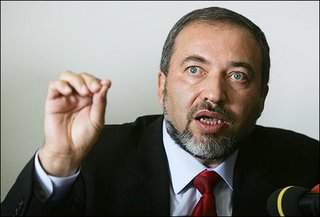 The rise of Avigdor Lieberman

"With the entry of Avigdor Lieberman into the government as deputy minister for "strategic threats" – essentially in charge of preparing for war with Iran – Israel makes a qualitative step toward a regime that increasingly resembles, in all its essentials, a rogue state, and, I might add, potentially a very dangerous one.

Lieberman's portfolio as minister in charge of strategic threats allowed the editors of Ha'aretz to quip "Lieberman is a strategic threat!" Here, after all, is a man who has threatened to bomb Tehran, the Aswan Dam, and Beirut. His entry into the government of Prime Minister Ehud Olmert, in coalition with Kadima and Labor, marks an ominous shift in the stance of the Jewish state.

Yet the line that separated Lieberman, the Jewish equivalent of David Duke, from the Israeli "mainstream" has been increasingly hard to discern for quite some time. As Arthur Neslen put it in the Guardian recently: "The most worrying thing about Lieberman is not that his ideas exist on a plane outside Israel's political continuum but that, in many ways, they are close to its dead center. The proposal to transfer 'the triangle,' an area around Um al-Fahm where 250,000 Palestinian citizens of Israel currently live, was first brought into the press spotlight at the end of 2000 at Israel's most prestigious annual policy-making forum, the Herzliya conference."

Yet here we are, confronted with the specter of Avigdor Lieberman, the would-be Hitler, currently the second most popular politician in the running for prime minister, right behind Benjamin Netanyahu. That a gangster of Lieberman's ilk is now a serious contender for the post of prime minister and his fascist party is rising in popularity are measures of how the Israeli settler colony, originally designed along left-wing Zionist-utopian lines, has hardened into a national socialist Sparta.

In any case, the War Party in the U.S. is likely to find him very useful: Lieberman's fiery rhetoric is sure to set off sparks in a very volatile region of the world, one that is just waiting to explode.

Finally, it must be remembered that Israel is a member of the nuclear club, with at least 400 nukes and perhaps more at its disposal. The chilling question is this: do we really want to see Israel's nukes fall into the hands of a madman like Lieberman?

If the Israeli government is going extremist, the moral and strategic implications of our continued assistance are grave: will we be complicit as Israel "transfers" hundreds of thousands of Arabs, many of them Israeli citizens? As hard-right ideologues embark on a campaign of aggression aimed at creating a "Greater Israel," will U.S. tax dollars continue to fuel the Israeli war machine?

Yet his entry into the government is quite significant, for Israel and for the world, in that it marks the end of the honeymoon era in relations between Israel and the West, particularly the United States. Israel and its Western amen corner have always insisted that the Jewish state is part of the West, yet the rise of Lieberman tells us something quite different."
Posted by Tony at 4:38 AM