U.S. Death Toll in Iraq Worst in a Year 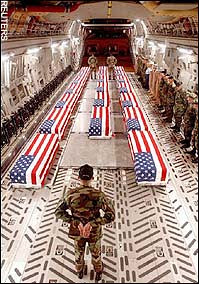 "BAGHDAD, Iraq Oct 26, 2006 (AP)— The number of American troops killed in Iraq in October reached the highest monthly total in a year Thursday after four Marines and a sailor died of wounds suffered while fighting in the same Sunni insurgent stronghold.

The U.S. military said 96 U.S. troops have died so far in October, the most in one month since October 2005, when the same number was killed. The spike in deaths has been a major factor behind rising anti-war sentiment in the United States, fueling calls for President Bush to change tactics.

The deadliest month for U.S. forces in Iraq was November 2004, when military offenses primarily in the then-insurgent stronghold of Fallujah, 40 miles west of Baghdad, left 137 troops dead, 126 of them in combat. In January 2005, 107 U.S. troops were killed.

Polls show a majority of Americans are opposed to Bush's handling of Iraq, and at a news conference in Washington on Wednesday, Bush indicated he shared the public's frustration even as he pushed back against calls for troop withdrawals. "
Posted by Tony at 10:05 AM