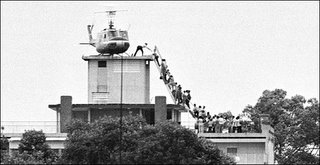 "So think of Tuesday's dog-and-pony show as "the light at the end of the tunnel" news conference. And think of Prime Minister Maliki as a poor stand-in for the recalcitrant-to-American-wishes South Vietnamese President Ngo Dinh Diem, assassinated in a U.S.-backed military coup in 1963, after which it was all downhill.

No longer was he the plodding, "stay the course" George Bush; now, he was the maestro of "change," a darting, dashing Wile E. Coyote of a president, zipping off a cliff while saying things like: "We're constantly changing. The enemy changes, and we change. The enemy adapts to our strategies and tactics, and we adapt to theirs. We're constantly changing to defeat this enemy."

Unlike the president, Ambassador Khalilzad and Gen. Casey undoubtedly know that they are putting on an act for the TV screens back home, that this is a moment to say whatever a desperate administration considers necessary to bring voters back into the fold. This is policy as vaudeville, a farce for everyone except those "martyrs," the Americans dying in Iraq, and, of course, millions of Iraqi civilians who are unlikely to feel mollified by Gen. Casey's lame reassurance.

Think of it this way: With the help of the Vietnam experience, our top generals are already beginning to create their own exit-strategies from this war. Along Vietnam lines, their tale will be simple enough: We won. They (still to be defined but leading candidates include Donald Rumsfeld and Pentagon civilian bosses, the media, and the American public) lost. We wuz betrayed! Talk about incipient "martyrs."

Let me suggest to the non-generals among us two Vietnam analogies that have yet to arise but couldn't be more relevant. Think of them as "the bloodbath" and "the non-withdrawal withdrawal" analogies.

The Iraqi future bloodbath happens to go by the name of "civil war." Of course, an actual civil war is underway there, but the claim has long been that, whatever blood is now being spilled, it will be nothing compared to what might happen if the U.S. military, the last bulwark between bloody-minded Sunni, Shi'ite, and Kurdish enemies, were withdrawn.

As the pressure for timetables and some form of phased withdrawal ratchets up in Iraq, you will certainly see the same sort of thing – "withdrawal" plans, like the one former State Department official Richard Armitage recently suggested, that will take endless (reversible) years to complete. A five-year withdrawal plan is not a withdrawal plan. It's a pacification plan for the "home front," a way to keep on keeping on.

These are among the possible endgame Vietnam analogies that are likely to arise. Unfortunately, that endgame could take a while. After all, if the Tet Offensive was the "turning point" in the Vietnam War, the war itself lasted almost as long after Tet as before, with almost as many American casualties."
Posted by Tony at 5:41 AM