Despair of Baghdad turns into a life of shame in Damascus 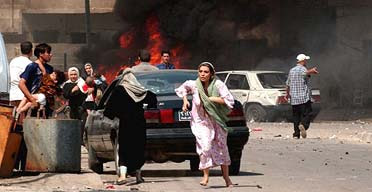 "As pressure mounts on President George Bush to announce a significant change of direction to the disastrous military occupation of Iraq, the stories of Mona and others like her are a sobering reminder of the consequences of the other Iraq that war has created: a place away from bombs and beheadings, but where the daily struggle for existence is still desperate, and where young lives continue to be torn apart.

Mona had become another victim of the growing sex trade among an Iraqi refugee community in Syria that local NGOs now estimate at 800,000 people, and to whose plight aid agencies say the international community continues to turn a blind eye.

Laurens Jolles, acting representative for the United Nations High Commissioner for Refugees (UNHCR) in Damascus, told the Guardian that international donor funds for the agency's Iraq programme have been drastically reduced for 2007, roughly halving an office budget he said was already "totally insufficient to provide tangible results".

UNHCR Damascus had requested an overall 2006 budget of $1.3m but got only $700,000, said Mr Jolles - amounting to less than $1 per Iraqi refugee per year, not including the agency's operating costs and its expenditure on non-Iraqi refugees.

The UNHCR report found that prostitution among young Iraqi women in Syria, some just 12 years old, "may become a more widespread problem since the economic situation of Iraqi families is increasingly deteriorating".

Overall, the UNHCR estimates more than 1.5 million Iraqis are internally displaced in Iraq, including some 800,000 who fled their homes prior to 2003, as well as 754,000 who have fled since. A further 1.6 million Iraqis are refugees residing in neighbouring countries, with the majority in Syria and Jordan.

"Iraq has seen the largest and most recent displacement of any UNHCR project in the world, yet even as more Iraqis are displaced and as their needs increase the funds to help them are decreasing," said Mr Harper. "This growing humanitarian crisis has simply gone under the radar screen of most donors.""
Posted by Tony at 5:40 AM