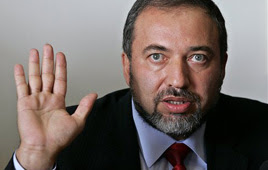 "In a frightening but long expected move, Israeli prime minister Ehud Olmert has brought the Yisrael Beitenu party into his coalition government. The party's leader, Avigdor Lieberman, is to be vice prime minister and, as "Minister for Strategic Threats," a key member of Israel's "security cabinet" in charge of the Iran portfolio.

Yisrael Beitenu is a dangerous extremist party with fascist tendencies that has openly advocated the "transfer" of Palestinians, including the transfer of Arab towns within Israel to a Bantustan-like future Palestinian entity. It has made clear that a Jewish supremacist state is more important than a democratic one. The party, whose strongest base is among Russian immigrants brought to Israel in the 1990s, surged at the Israeli election earlier this year, taking eleven seats in Israel's 120 seat Knesset.

It is dismaying that the European Union, a key international actor, seems set to maintain warm, normal relations with this extremist government, thus giving it encouragement and legitimacy.

"You will understand that we cannot interfere with the setting up of a foreign government. This is a matter for which the concerned State alone is responsible," wrote Cristina Gallach, the official spokesperson for Javier Solana, the EU High Representative for foreign policy, in an email responding to a query about whether the EU would impose sanctions on Israel if Yisrael Beitenu joined the government.

In an interview with an Israeli newspaper in September, Yisrael Beitenu leader Lieberman said: "The vision I would like to see here is the entrenching of the Jewish and the Zionist state...I very much favour democracy, but when there is a contradiction between democratic and Jewish values, the Jewish and Zionist values are more important." (Scotsman, October 23, 2006)

In addition to espousing ethnic cleansing, Lieberman has a long history of inciting discrimination, hatred and violence against Palestinians within the Jewish state and living under Israeli military occupation in East Jerusalem, the West Bank and Gaza Strip. When he served as minister of transport in a previous government, Lieberman called for all Palestinian prisoners held by the Israeli occupation authorities to be drowned in the Dead Sea and offered to provide the buses ("Lieberman blasted for suggesting drowning Palestinian prisoners," Ha'aretz, July 11, 2002). He has proposed to strip the citizenship of, and expel any Palestinian citizen of Israel who refuses to sign a loyalty oath to the Jewish Zionist state ("A Jewish demographic state," Ha'aretz, June 28, 2002).

In 2002, Lieberman declared, "I would not hesitate to send the Israeli army into all of Area A [the area of the West Bank ostensibly under Palestinian Authority control] for 48 hours. Destroy the foundation of all the authority's military infrastructure, all of the police buildings, the arsenals, all the posts of the security forces... not leave one stone on another. Destroy everything." He also suggested to the Israeli cabinet that the air force systematically bomb all the commercial centers, gas stations and banks in the occupied territories (The Independent, March 7, 2002). And, he has proposed bombing Egypt's Aswan Dam, despite that country's peace treaty with Israel since 1979. What will he propose to do to Iran?

Most glaringly, since Palestinians under occupation elected Hamas to lead the Palestinian Authority last January, in the Arab world's most free election ever, the EU has interfered in their affairs in the most irresponsible manner, imposing a total siege and cut off of aid that has directly penalized the Palestinian population, causing widespread hunger and deprivation. This siege is explicitly intended to force the Hamas-led authority to abandon the platform on which it was elected, or to force it out of office completely. The European Union, under Solana's personal stewardship, orchestrated this gross interference in the development of Palestinian democracy and punishment of those who tried to practice it."
Posted by Tony at 8:53 AM