Talking To The Resistance 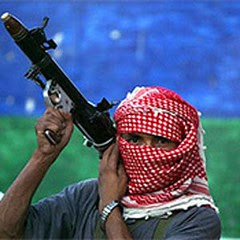 AN IMPORTANT ARTICLE
By Robert Dreyfuss

"In an exclusive interview , a prominent Iraqi Baathist says that the Baathist resistance in Iraq is preparing a major offensive for January 2007, and that as long as the United States refuses to open an unconditional dialogue with the Baathists, the armed resistance and its allies, there will be no respite from the withering attacks that have left more than 85 U.S. troops dead this month alone.
Salah Mukhtar, a former top Iraqi diplomat, says the resistance movement has secured control of most of Baghdad in anticipation of an American withdrawal from Iraq. Many members of the Iraqi national assembly are sympathetic to the Baath Party and the resistance, he says, and many of the tribal leaders of Iraq—both in the western province of Anbar and in parts of the mostly Shiite south—now support the Baathists.

As a leading member of the now-deposed Iraqi government, Mukhtar carries a pronounced anti-Iranian bias as well as a bias against the Shiite-dominated government in power. But much of what he says rings true, and he brings a perspective that is rarely heard in the debate about Iraq within the United States. Too often, the media limits its coverage to spokesmen for the ruling Shiite-Kurdish alliance and spokesman for the moderate, often pro-American Sunnis who have been elected to the national assembly. The views of the resistance are not included.

We expect the first month of next year [January 2007] will be decisive. The Americans are exhausted, and the resistance is preparing simultaneous attacks on American forces everywhere. The increase in U.S. casualties are rising sharply as part of a decision by the resistance to increase these attacks.

The recent mortar attack on a large U.S. facility near Baghdad, which set off a prolonged series of explosions after an ammunition dump was struck, is the kind of attack that can be expected in the future. “The attack on the American base was part of a new strategy to inflict heavy casualties on American troops in Iraq,” says Mukhtar.

Mukhtar asserts that the resistance can easily seize control if the United States withdraws from Iraq. “The armed resistance has finished all the preparations to control power in Iraq,” says Mukhtar, who is in close contact with Baath Party officials inside and outside Iraq and with leaders of the Iraqi resistance.

The middle class collaborators with the United States have started to leave Iraq already. Most of them are outside Iraq: Ahmed Chalabi, Iyad Allawi and others. A second wave of agents are preparing to leave, and some have already left, to Jordan, to Syria, to Britain, and some other places, because the strategic conflict, practically speaking, has reached the point of putting an end to the occupation. The resistance is controlling Baghdad now.

He adds that if and when the United States begins to leave Iraq, the principal threat to the country’s security will come not from civil war, but from Iraq’s neighbor, Iran, which has close ties to many of the Iraqi clergy, political parties, militias and paramilitary forces.

The resistance, says Mukhtar, is led primarily by highly trained officers of the former Iraqi army, and its leaders include both Sunnis and Shiites, Arabs and Kurds, Muslims and Christians. And although it is strongest in Baghdad and in Anbar, it has support throughout the southern half of Iraq, where many Shiites are turning against the Iran-backed forces such as the Mahdi Army of Moqtada al-Sadr and the Badr Brigade of the Supreme Council for the Islamic Revolution in Iraq (SCIRI), he says.

Mukhtar revealed, for the first time, that both Secretary of Defense Donald Rumsfeld and Secretary of State Condoleezza Rice have met with Saddam Hussein in prison during recent visits to Iraq, seeking his help.

They both tried to convince him to make statements calling on the resistance to lay down its arms and to cooperate in the so-called political process. He rejected that. But they told him, ‘You can choose between the fate of Mussolini and the fate of Napoleon Bonaparte.’ Later, they alluded to something else, involving the return of the Baath party … And now some Arab governments are pressuring the United States to accept the return of the Baath Party to guarantee the stability of Iraq. Saudi Arabia, Yemen and some other Gulf states have contacted the United States to convince the United States to reinstate the Baath Party as the only solution to minimize Iranian influence in the region."
Posted by Tony at 8:23 AM