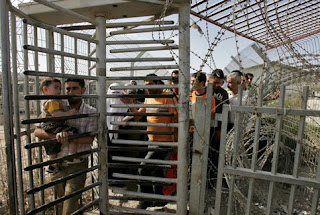 "On Sunday, 28 September 2008, the second intifada (uprising) entered its ninth year in the midst of the Israeli Occupation Forces' (IOF) gross violations of international humanitarian law and the international community's failure to intervene.

Monitoring and documenting work of human rights in the Occupied Palestinian Territories (OPT) shows that the IOF continue to kill civilians and demolish civilian property especially homes. This is in addition to arbitrary arrests and degrading treatment of civilians that IOF carry out during military incursions and at checkpoints......

Al Mezan Center's information on victims, killed either by the IOF or during confrontations with it, as well as material damages of the Strip's civilians during the intifada shows that the death toll amounts to 3,143, including 611 children, 113 women and 22 disabled persons. It also shows that there are 7,650 demolished homes, including 3,014 pulled down. Furthermore, 33,948 dunums (a dunam is the equivalent of 1,000 square meters) were bulldozed, including 9,684 dunams that were bulldozed more than once. The IOF destroyed 378 public facilities, 647 vehicles of different types and 899 manufacturing and commercial facilities......."
Posted by Tony at 3:37 AM