USrael and the Pharaoh, Partners in Starving Out the Gaza Palestinians...... 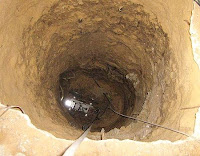 "US and Egyptian soldiers pair up in recent weeks in a project to uncover Palestinian weapons' smuggling tunnels [COMMENT: the tunnels are used to bring in badly needed medicine, food and other critical supplies, in very short supply because of the siege imposed on 1.5 million people!]; 42 tunnels discovered in less than a month.

American soldiers have teamed up with Egyptian troops in the Sinai in recent weeks for an operation designed to uncover Palestinian weapons' smuggling tunnels underneath the Philadelphi Route, along the Egypt-Gaza border.

The operation has already yielded important fruits: Thanks to new, secret American-developed technology, the US Army's Corps of Engineers uncovered 42 tunnels running between Egypt and Gaza in less than a month, an unprecedented number in such a time span.

The joint American-Egyptian initiative was agreed upon half a year ago, during Defense Minister Ehud Barak's visit to Egypt. American experts arrived in the region a few weeks ago, making an effort to keep a low profile by using civilian dress.

The machinery that they brought with them, which probably relies on sonar in some way to identify underground tunnels, seems to be one of a kind. To date, it appears that Israel does not possess similar technology....."
Posted by Tony at 11:41 AM