Stern US warning to Syria not to invade Northern Lebanon 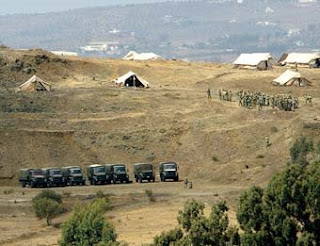 "Washington accompanied this warning to Damascus, DEBKAfile has learned, with its first explicit threat of military intervention to aid Lebanon should Syria go through with its planned incursion of the North.
DEBKAfile first revealed the concentration of 10,000 Syrian troops on the Lebanese border on Sept. 20 and again on Sept. 27.
Click HERE

The warning, according to our sources, was delivered on Sept. 28 by secretary of state Condoleezza Rice to the Syrian foreign minister Walid Mualem whom she invited for an urgent meeting in New York. The day after they met, Mualem was handed a second warning by undersecretary of state David Welch, who specified precisely whic Syrian movements the US government would deem crossing the Lebanese border.

The harsh words from the top two American diplomats left the Syrian minister with little option but to promise there would be no Syrian incursion. However, in a number of subsequent interviews, Mualem claimed his talks with the two American officials focused on Washington’s support for the indirect talks between Jerusalem and Damascus, a tale made of whole cloth.

In the week since Washington warned Damascus off, nothing has changed in the Syrian military deployment on the Lebanese, our military sources confirm.

Syrian officials talking to Western diplomats are now maintaining that Islamic extremists are setting up an emirate in northern Lebanon which will jeopardize the stability of the entire region......."
Posted by Tony at 5:01 AM