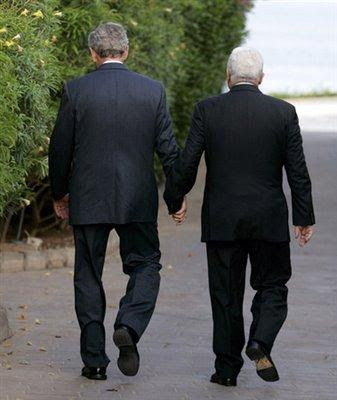 "President Bush foreign policy legacy in the Middle East is not limited to the human tragedy that he inflicted on Iraq and the region or the destruction of Lebanon and the massacres of civilians including children that was described by his Secretary of State Condoleezza Rice as the "birth pangs" of a new Middle East. Bush will leave a lasting legacy in Palestine too.

Bush created the make believe “peace process” while doing everything to prevent the peace. Bush aborted the Palestinian democracy experiment, the first in the Arab Middle East, by refusing to deal with the elected government. He supported murdering Palestinian civilians and abduction of their lawmakers by the Israelis and he refused to condemn Israel’s expansion policy and dividing the occupied land into ghettos. The US has spearheaded the movement to de-legitimize the only democratically elected government in the Arab World while at the same time declaring that the lack of democracy is the core problem in the Middle East........
The PA is wasting precious time in the endless negotiations that have given Israel time to create facts on the ground in the occupied lands, brought despair and division among the Palestinians and rendered the establishment of a viable Palestinian state impossible. It is time the PA leaders should do what honorable leaders with principles and courage do when they fail to deliver on their promises. They should turn to their long suffering people and acknowledge their failure to achieve peace; they could not halt settlement expansion, incursions by the Israeli military, settlers’ attacks on Palestinian farmers and they could not remove Israeli checkpoints. The PA leaders should step aside and make room for new blood and new approach for dealing with Israel. But I am certain the PA chief Mahmoud Abbas will follow the tradition of the Arab despotic leaders who cling to power even after conceding their people’s aspirations. I hope I am wrong!"
Posted by Tony at 4:37 AM