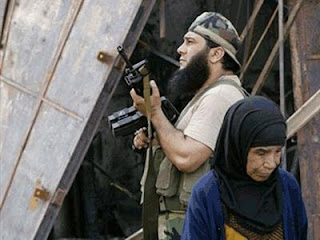 "....
A Combustible Potpourri
In southern Lebanon, a veritable “witches brew” exists. In this relatively small area, one finds Hezbollah, UNIFIL troops, the Lebanese Army, the Palestinian factions of Ain al-Hilwah including Fatah, Hamas and militant Lebanese Salafist groups; and now, formal al-Qaeda representation. Not to be forgotten of course, are the Israelis across the border.
Although al-Qaeda and their allies are far from posing a direct military threat to Hezbollah, this was never going to be their modus operandi anyway. Rather, they will attempt to achieve their objectives by creating conditions giving pretext to the Israelis to strike Lebanon, launching attacks on UNIFIL forces, assassinating high-profile figures in the country so as to foment political instability, and orchestrating suicide/car bombings as we just witnessed in Damascus.
In the saga known as the "Battle of the Camps", Chapter 1 was titled Nahr al-Bared. Chapter 2 may very well be Ain al-Hilwah. It is a tale Hezbollah hopes will soon finish, but one whose ending, I fear, has yet to be written."
Posted by Tony at 4:20 AM