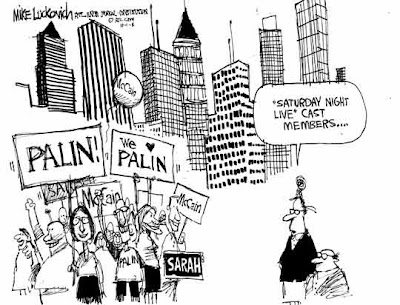 "In advance of tonight’s vice presidential debate, fewer than four-in-ten (37%) Americans say Sarah Palin is qualified to serve as president if necessary, while a majority (63%) say her opponent, Joe Biden, is qualified for the job. More than half (52%) viewed Palin as qualified in early September. Women are slightly less likely than men to view Palin as qualified. Both Palin and Biden are viewed favorably by a majority of Americans, but while views of Biden have remained virtually unchanged over the past month, the number of people viewing Palin unfavorably has risen from 32% to currently 40% as views have become increasingly polarized along partisan lines."
Posted by Tony at 4:53 AM