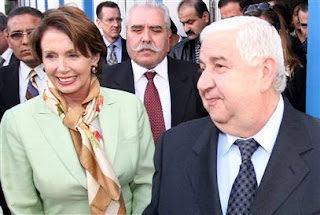 "WASHINGTON, Sep 30 (IPS) - A series of meetings between U.S. and Syrian diplomats, including Secretary of State Condoleezza Rice and her counterpart, Foreign Minister Walid Moallem, at the United Nations over the past week is stirring speculation that Washington may at last be moving toward engaging Damascus.

Instead of focusing on specific issues of special interest to the U.S. -- mainly Washington's demands that Syria crack down hard against the infiltration of Sunni extremists into Iraq and stop supplying Hezbollah in Lebanon -- the discussions also reportedly covered other topics as well, notably Damascus's appeals for Washington to involve directly itself in a burgeoning peace process between Syria and Israel......."
Posted by Tony at 4:31 AM