Credit Crunch or rather Zio Punch? 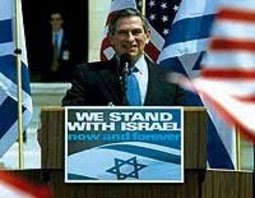 ".......
The Wolfowitz Doctrine
Back in 1992. Dick Cheney appointed Paul Wolfowitz (Undersecretary for Defence Policy) and his deputy Lewis ‘Scooter’ Libby to draft the USA Defense Planning Guidance (DFG) for the 1994-99 fiscal years. The imperialist Zio-centric document that was later named as the “Wolfowitz Doctrine” was soon leaked to the New York Times and raised some harsh criticism. However, as history sadly teaches us, not enough or nothing at all was done to curb Wolfowitz’s and Libby’s murderous enthusiasm when it was still relatively young.
The astonishing document was there to merge American and global Zionism interests into a unified belligerent practice. It all happened in the wake of the collapse of the Soviet Union, bearing in mind that America was becoming a single super power.
“Our first objective,” says Wolfowitz, “is to prevent the re-emergence of a new rival, either on the territory of the former Soviet Union or elsewhere, that poses a threat on the order of that posed formerly by the Soviet Union.”......."
Posted by Tony at 6:50 AM