How I became a target for Israel's 'Jewish terrorists' 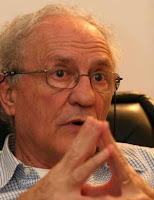 "Zeev Sternhell is careful about his choice of words when he unhesitatingly calls the pipe bomb which exploded outside his front door last week "an act of Jewish terrorism."

As a Holocaust survivor orphaned by the age of seven and a combat veteran of Israel's wars, Professor Sternhell, 73, who was lucky to have only been injured in the leg by flying shrapnel from the bomb, is "horrified" not for himself but because it might have hit his wife, daughter his grandchildren on one of their sleepovers, or their neighbours. "It was a terror act because they couldn't know who would have been hit.".....

But if the attack was meant to silence one of the country's foremost public intellectuals, it hasn't worked. For a start he does not rule out a connection with strong signs of increasing violence by settlers against Palestinians in the West Bank. In recent weeks, extremist settlers have rioted, blocked roads, burned Palestinian orchards and in one case, armed settlers have attacked a village.

Lamenting that the army and the police are "either unwilling or unable or probably both" to enforce the law against attacks on Palestinians in a West Bank where the settlers enjoy a kind of "self rule", he says the extremists believe that "people like me who think that they are the real danger to Zionism, to the future of the Israeli state, should be neutralised and should be punished... So I think there is a link between the brutality and violence that is the reality of everyday life in the West Bank and this attack."....."
Posted by Tony at 8:58 AM