Evicted Jerusalem family refuses to give up 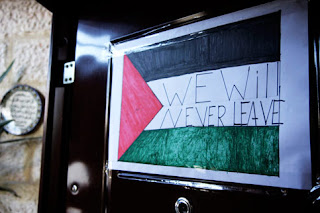 "At 5:15am on Sunday, 2 August, I woke up to the sound of the Hanoun family's front room windows being smashed in. I had just laid down to rest only 20 minutes earlier.

The Hanoun family is one of 27 families in the Sheikh Jarrah neighborhood of East Jerusalem facing eviction from their homes as part of a plan to implant a new Jewish settlement in the area. They are refugees from 1948, after being displaced from their home in Haifa during the Nakba, or catastrophe. The family includes 18 members, six of whom are children. They have lived in Sheikh Jarrah since 1956 when the Jordanian government and the UN agency for Palestine refugees (UNRWA) gave them their houses as part of a project to house Palestinians forced to flee their homes......."
Posted by Tony at 6:57 AM