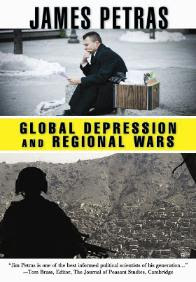 "These extraordinary times--unprecedented in modern history--are marked by a worldwide depression and regional wars involving all the major imperial powers. This book exposes the roots of the crisis in the unsustainability of the United States' military-driven empire building based on a volatile speculative economy, and influenced by Zionist policy makers committed to the colonialist state of Israel......."
Posted by Tony at 4:28 PM