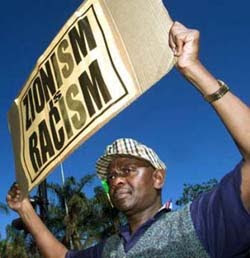 "An Arab couple whose one-year-old daughter was expelled from an Israeli day-care centre on her first day are suing a Jewish mother for damages, accusing her of racist incitement against their child.

Maysa and Shua’a Zuabi, from the village of Sulam in northern Israel, launched the court action last week saying they had been “shocked and humiliated” when the centre’s owner told them that six Jewish parents had demanded their daughter’s removal because she is an Arab......

A recent survey by Merchavim found that the segregation among pupils was mirrored by segregation among teachers. Despite some 8,000 Arab teachers being recorded as unemployed by the education ministry, only a few dozen work in Jewish schools, mainly teaching Arabic, even though the Jewish system is suffering from staff shortages........"
Posted by Tony at 8:40 AM