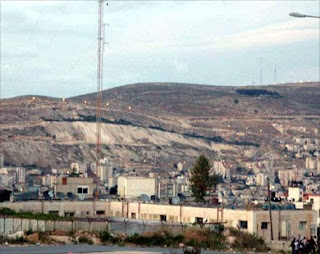 (left: Jneid prison in Nablus)
"The Hamas movement stated Monday that one of its members died at the Jneid Palestinian prison in Nablus city, in the northern part of the West Bank. Palestinian Security Forces spokesperson, Adnan Al Dameery, stated that the detainee committed suicide [Of course you believe the Dayton forces spokesman, don't you?].

In a press release Al Dameery stated that said that Fadi Hamarna, 28, was arrested by the Palestinian security forces on June 15, 2009, was interrogated until June 25, and was placed in solitary confinement awaiting a decision for his release.

He stated that prison guards found Hamarna dead with his bed sheet wrapped around his neck.......

Hamas added that ‘the series of crimes committed by Fateh and its militias against Hamas leadership, and the resistance, are the beginning of a dangerous stage of violations, and an attempt to uproot Hamas’......."
Posted by Tony at 6:56 AM