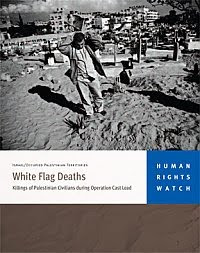 .....In each of these incidents, the evidence strongly indicates that, at the least, Israeli soldiers failed to take feasible precautions to distinguish between civilians and combatants before carrying out the attack. At worst, the soldiers deliberately fired on persons known to be civilians.
Under the laws of war, parties to an armed conflict must take all feasible measures to distinguish between civilians and combatants, and they may target only combatants. Civilians lose their protection from attack only during the time they directly participate in hostilities. Deliberate attacks on civilians are violations of the laws of war, and individuals who commit or order such attacks are responsible for war crimes........"