Hamas turns its attention to 'virtue' 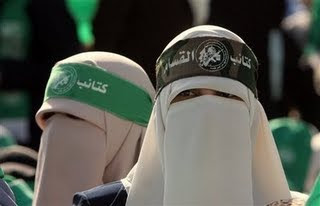 Forced 'Islamisation' is raising concerns about government direction, as some point to Gaza's isolation as the root cause

"A number of recent reports from Gaza have given cause for concern about the direction the Hamas government is taking with regard to social freedoms and a religiously driven "virtue" promotion campaign. Specific incidents, coupled with public declarations by high-ranking officials, suggest a trend of increasing, forced "Islamisation".
One high-profile case was the ruling by Gaza's chief justice, Abdul-Raouf Halabi, at the end of last month, stipulating that female lawyers would be obliged to wear headscarves in court. Although this will not affect many, it was the principle of the order that disturbed both lawyers and human rights groups in the territory. Seven organisations issued a joint statement expressing their "concern" and the context of "a series of infringements upon public and personal freedoms in the Strip".......
.....Government ministers from different departments have met to discuss a list of regulations to be implemented. As a piece in al-Akhbar noted two weeks ago, "women and the uses of technology seem to be the focus of the 'yes for virtue' campaign" whose purpose "according to Yousef Farhat, the general director of the public administration for preaching and guidance in the ministry, is to 'fight the non-ethical occurrences in Gaza'."
Since the PLC elections in 2006, and especially after taking control of the Gaza Strip in 2007, Hamas officials have insisted there will be no attempt to force a particular way of life on the 1.5 million trapped Palestinians. But the repeated stress on example and persuasion has sounded increasingly hollow – as a human rights activist put it, Hamas denials "contradict what we see on the street".......
Eyad Sarraj, a prominent Gazan mental health expert and psychiatrist, noted that Hamas is focusing on the likes of "women's dress" and "segregation of the sexes, especially in public or in schools". Rather than prioritising "honesty or financial probity", the obsession is with "sex", because "these things are visible and people are easily intimidated because such issues address their traditional anxieties".........
The move towards a more firm imposition of conservative Islamist values comes as Hamas is making a keen effort to reach out to the international community. The movement's leaders, both in Palestine and abroad, have repeatedly stressed Hamas would accept a two-state solution on the 1967 borders, and indeed, would respect a negotiated political solution should the deal be endorsed in a referendum by the Palestinian people.
Already hit by criticism in Gaza by Islamic Jihad about a theoretical willingness to negotiate with Israel, it is possible that Hamas's leaders are seeking to safeguard its credibility and among the radical jihadist groups by off-balancing improving international relations with a domestic hard line........
While the authorities in Gaza focus on "preserving public morals" and clampdown on dissent, the Fatah-dominated Palestinian Authority carries out arrests of political opponents across the West Bank and deploys US and Jordanian-trained forces to police Israel's occupation. As one man told a BBC reporter last week, "No Hamas, no Fatah – all no good". This is a viewpoint likely to be shared by increasing numbers of Palestinians in the occupied territories, in the absence of a unified leadership offering a programme of strategic sense and political integrity."
Posted by Tony at 11:04 AM