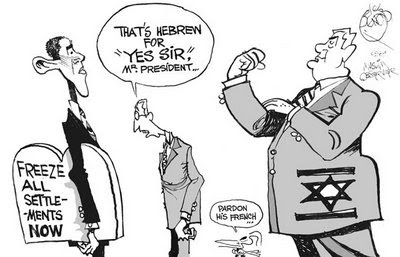 (Cartoon by Khalil Bendib)
"Israeli media reports that visiting National Security Adviser General Jim Jones and Secretary of Defense Robert Gates have told the government of Prime Minister Benjamin Netanyahu to stop complaining about Iran because the US is preparing to take action "in eight weeks" demonstrate that even when everything changes in Washington, nothing changes. President Barack Obama has claimed that a peaceful settlement of the Palestinian-Israeli conflict is a high priority but the Israelis and their allies in congress and the media have been able to stonewall the issue. Israel has made no concessions on its settlement policy, which is rightly seen as the single biggest obstacle to eventual creation of a Palestinian state, and has instead pushed ahead with new building and confiscations of Arab homes. Obama has protested both Israeli actions but done nothing else, meaning that Israel has determined that the new US president’s policies are toothless, giving it a free hand to deal with the Arabs. Vice President Joe Biden’s comments that Israel is free to attack Iran if it sees fit was a warning that worse might be coming. If the Israeli reports are true, it would appear that the Obama Administration has now bought completely into the Israeli view of Iran and is indicating to Tel Aviv that it will fall into line to bring the Mullahs to their knees. In short, Israel gets what it wants and Washington yet again surrenders......."
Posted by Tony at 6:06 AM