Fayyad to Haaretz: Not our Business Whether Israel is Jewish! 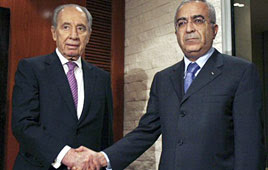 "Israel's character is Israel's business and nobody else's," Fayyad says in an interview with Haaretz.......

Fayyad seems to prefer to talk about economic issues rather than politics. His critics say he gives tail wind to the "economic peace" touted by his Israeli counterpart, Netanyahu.

Oman, Qatar: We'll Renew Israel Ties if It Freezes Settlements
The United States told Israel last week that Gulf states Oman and Qatar are willing to renew their relations with Israel if it agrees to a moratorium on construction in the West Bank, Haaretz has learned......."
Posted by Tony at 4:00 AM