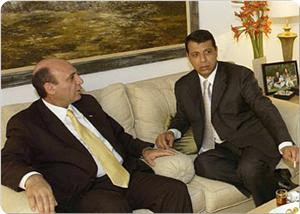 "BETHLEHEM, Aug 12 (IPS) - Despite internal divisions, much criticism and against enormous odds, the Fatah movement has emerged from its Sixth Revolutionary Council here with new blood in its leadership and hopes for a fresh agenda.....

.....Fatah may be showing some signs of revival but it faces many obstacles.

The election to the Central Committee of former Gaza Fatah leader Muhammad Dahlan from the younger guard is divisive for Fatah members.

Dahlan is accused of attempting to instigate a coup - allegedly armed and financed by the CIA and the Israelis - against Hamas in 2007. Hamas pre- empted this with a coup of its own which saw Fatah lose control of Gaza in the 2007 civil war.

Many Fatah members blame Dahlan for this loss. Others question how a poor Gazan became a millionaire overnight, owning wealthy residential property in Dubai.

Fatah's future leadership platform will be contingent, amongst other things, on its relationship with the PA......"
Posted by Tony at 3:52 AM