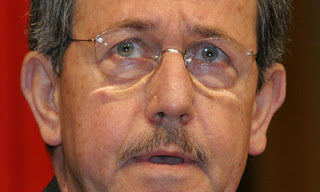 "President Bashar al-Assad's father-in-law is under pressure to step down as co-chairman of the British Syrian Society after the resignation of all its British board members over the brutal repression of protests against the Damascus regime.
Dr Fawaz Akhras, a Harley street cardiologist, faced embarasssment last week over leaked emails published in the Guardian which showed him advising Assad on how to handle the crisis and his daughter Asma – the president's wife – shopping for luxury goods while violence raged.
Sir Andrew Green, a former British ambassador to Syria and co-chairman of the society, admitted it had faced disarray over the past year and that the emails – especially those showing Akhras advising Assad how to rebutt evidence of civilians being tortured – were the last straw....
The BSS has been in crisis since the uprising began last March. In September HSBC said it would no longer represent the society and Wafic Said, the British-Syrian billionaire and philanthropist, resigned as a director.
"The problem is that the BSS has buried its head in the sand, maintaining a policy of silence which amounts to tacit support for the current regime in Syria and what is happening there," Said wrote in a letter obtained by the Guardian. "This is unacceptable. The BSS has lost all credibility."....."
Posted by Tony at 3:03 PM