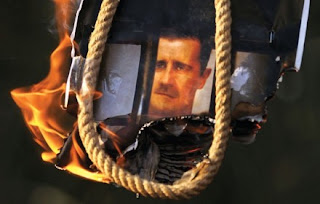 "Heavy fighting has broken out between Free Syrian Army rebels and forces loyal to President Bashar al-Assad in a main district of Damascus that is home to several security installations, according to witnesses.

The sound of heavy machinegun fire and rocket-propelled grenades echoed through the heavily guarded Mezze district in the pre-dawn hours of Monday, residents said. There was no immediate word on casualties but residents said by telephone the fighting was intense.

"There is fighting near Hamada supermarket and the sound of explosions there and elsewhere in the neighbourhood. Security police have blocked several side streets and the street lighting has been cut off," a resident of the area said.

The fighting in the capital came after a car bomb ripped through a residential area of Syria's second city, Aleppo, on Sunday, and as activists reported heavy clashes across the country between state forces and rebels fighting to overthrow Assad...."
Posted by Tony at 4:03 AM