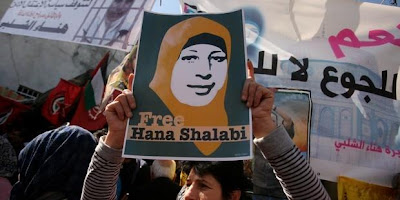 "The Israeli authorities should immediately release a Palestinian detainee or charge her with a recognizable criminal offence and promptly try her, Amnesty International said amid fears that the woman could die in detention after 37 days on hunger strike.

Hana Shalabi, 30, from the village of Burqin in the northern West Bank, is allegedly affiliated with the Islamic Jihad movement but has never been charged with a criminal offence.

She was transferred to Meir Hospital in the central Israeli town of Kfar Saba on Tuesday night, but remains under Israeli custody and constant armed guard.

“When her lawyers and independent physicians have been given access to her, Hana Shalabi has reported that Israel Prison Service officers have handled her violently while transferring her to hospital or the military court, and consistently pressured her to end her hunger strike,” said Ann Harrison, Amnesty International’s deputy director for the Middle East and North Africa.

“Amnesty International has repeatedly called on the Israeli authorities to release Hana Shalabi and other Palestinians held in administrative detention, unless they are promptly charged with internationally recognizable criminal offences and tried in accordance with international fair trial standards.”

Under administrative detention, Israeli military orders allow the authorities to detain Palestinians from the occupied West Bank without trial indefinitely if they are deemed to be a “security threat”.

A doctor from Physicians for Human Rights - Israel (PHR) who saw her on Monday reported that she was at risk of death because she could suffer from heart failure at any moment, and called for her immediate hospitalization.

According to PHR, she has lost 14kg (31lbs) since her arrest, and suffers from impaired thyroid functions and severe pain, weakness and dizziness......"
Posted by Tony at 4:04 AM